the countdown has begun at our house already.

perhaps this all seems a bit preemptive, but there's an awful lot of adjusting to be done around here, and we want to give ourselves enough time to start all over again should something not go according to plan (or should the little dudes decide to be difficult).

our little angels difficult? never! you must be thinking.

ah, but let me remind you that these boys both had acid reflux, one had colic, and rather than learning how to self-soothe, they would scream themselves into a frenzy. in fact, they were 5 months old before they were sleeping through the night.

so, i have reason to fear that they are not going to like the role they must play in this transition.

the biggest change for them will be giving up their crib for #3 and moving into toddler beds. this has been waking me up in the middle of the night in a cold sweat as i think about the fact that my sweet boys love to play in their crib for sometimes an hour (or more) after they go "down" no matter what time we put them in there, how tired they are, or what measures are taken to get them calm and sleepy. how is it going to work when they have freedom to get out of bed & do whatever they want? will they ever sleep?

well, yesterday we took the plunge & moved on to phase 1 of this big experiment: taking the crib rail off their crib. that way, they can get used to the freedom, but still be in "their" bed for a while & still totally share with each other. eventually, they will move to beds of their own.

i felt victorious already as the boys played on, in, and around their "new" bed, hopping up and down with ease & giggling like mad. this would be no problem.

then, around 12.30, we started in on our naptime routine. things were going according to plan. until i turned to walk out the door. at which moment both boys began to scream so loudly i was sure the neighbors were going to call the police.

it only took 15-20 minutes for the screaming to stop & for the party to begin. and by 1.15 they had even turned on the radio. what i would have given for a secret spy cam!

at 2.00 the radio was off again & i could hear some of the goings-on. as i listened, i was sure they had decided that they could do everything they would never do while i am in the room. i heard them desperately shaking their piggy banks, trying to get out enough money to head to the store for some milk, i'm sure. it was then i decided that something had to be done before they swallowed a dime.

doing my best to rouse the spirit of supernanny, i walked into their room, didn't make eye contact, took out all the pictures, banks, and anything else that didn't resemble a plush toy, and walked back out.

this time the crying only lasted a moment.

by 2.20, all was silent, so i decided to peek in and see what had happened. that's when i saw this: 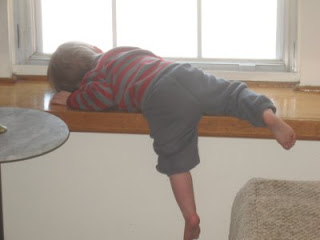 yes, that is in fact thing 1 asleep like a cat on the window seat. i knew i couldn't leave him there, one foot dangling off the side, but when i tried to open the door a little further, i found this: 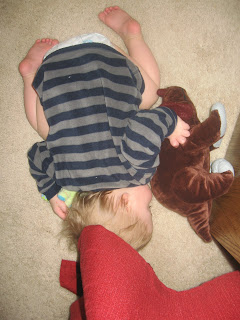 thing 2 must have been waiting for my return & passed out right at the door -- completely blocking my entrance. thankfully we started this whole process now, because if we had waited a month or more there's no way i could have squeezed my belly through the door. as it was, it was a feat of acrobatics & sucking in (too bad there's no way to suck in your backside).

naptime was short yesterday, but not a total failure. bedtime wasn't terrible either. daddy is very good at keeping them happy as he leaves the room. #1 didn't cry at all and #2 just for a moment. it did take an exceptionally long time before they fell asleep and it looks like a bomb went off in their room.

but they fell asleep. curled up next to each other on the floor.

Email ThisBlogThis!Share to TwitterShare to FacebookShare to Pinterest
Labels: baby, bedtime, brothers, growing up, I must be crazy, rest, sleep, twins

Oh my gracious!! I'm so thankful I only had one at a time! That sounds crazy! You're amazing!!

Those pics are hilarious, Meg! Laughing out loud here...

Meg
I am so blessed to be living my life as a follower of Christ, married to my best friend, and mother to three beautiful boys!